Two Truths and a Lie: The Life of a VA 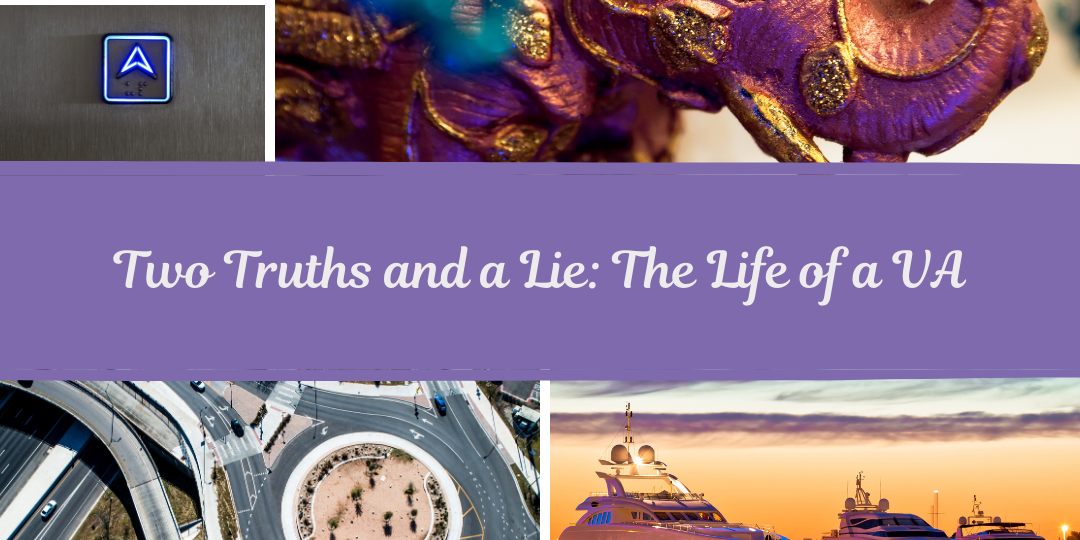 Two Truths and a Lie: The Life of a VA

I was talking with another VA recently about a Network even she was going to (Virtually, obviously). She needed to prepare two truths and a lie. The idea being everyone stood up, told their tales, and everyone had to guess which was the lie. She asked what would I say?

These were literally the off the top of my head responses:-

I was once asked to “urgently” provide aerial photos of complex round-a-bouts within a twenty-mile radius. Pre-google earth I hasten to add!

I had to defuse a rather tense situation that involved arranging the collection of a bull’s head and testicles (yes, real ones!), from what can only be described as an angry yet perplexed team of engineers. They were on-site to complete the install of a lift (elevator), needless to say when they cracked the create open, they weren’t bargaining on a bulls head nor his testicles being in there. Situation diffused, bulls head and bits removed, and the correct elevator parts located and delivered.

Being asked to write and design a flyer for an event showcasing the company’s services. Not too out there, until I asked when it was needed by. The response? “Err, well my train leaves for the event in 25 minutes, and you need to drop me at the station too”.

As we continued to discuss the various requests we’d had over the years, they ranged from the sublime to the ever so slightly ridiculous; source a private yacht for 28 people, provide ten questions about Robbie Williams (the CEO was going to a dinner party and had forgotten he’d agreed to host this part of the quiz!), to sourcing life-sized pink mechanical elephants for a launch party.

We struggled to come up with an actual lie. We concluded that both as PA’s and VA’s, we occasionally get asked the most random or ridiculous tasks, but that as a profession we are rarely not able to deliver. We are open to being challenged!

Whilst I don’t think I only want to source pink elephants or retrieve random animal parts, it does reflect how adaptable and resourceful VA’s can be. It also shows how you can think outside the box when it comes to delegating or outsourcing tasks.

Oh, and in case you’re wondering…. The photos of the roundabouts were so he could test his son on approach lanes before his driving test; The Bulls head and testicles turned out to be a hunting trophy – the airline had miss-labelled the creates; And the flyer, well it wasn’t my finest design, and the print copy not as I would have liked, but he made his train with 50 flyers (to be used sparingly!) and secured two new clients and several leads from the event. I chalked that up as a success.

What’s the strangest or most random thing you’ve been asked to do in your job? I’d love to know!

Any cookies that may not be particularly necessary for the website to function and is used specifically to collect user personal data via analytics, ads, other embedded contents are termed as non-necessary cookies. It is mandatory to procure user consent prior to running these cookies on your website.